Burial? Cremation? Which is preferable?

From a few posts at "Bigthink.com" earlier this year-  (under the Claude Balloune pseudo-gnome)
Further reading:  The Atlantic: 2014 Article  (scary!)

... Save energy. Cremation is wasteful! It costs energy. And only adds to global warming with its carbon footprint! If the body's gonna be dumped into the ocean, then do it simply like they did with Osama. He got the best burial, the old rascal.

Trouble is, if you live 1000 KM from the oceanas I do, there's a bit of a problem with ahem- storage. Perhaps the body could be frozen and put in a large insulated picnic hamper and quickly shipped to the ocean.

Hey, maybe commercial airliners could dump bodies as they cross the Atlantic or Pacific. They could do SOMETHING useful as they transport live bodies between countries!
And think of the funeral ceremony onboard! Then the bereaved would finally press a button, a bomb-bay door opens, and the bodies (with minimal coffin if any) are consigned to Davy Jones' locker!
This could be good business for all those airlines going bankrupt. And the bereaved could later hold a wake in London or Paris! 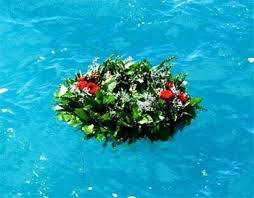 Or, if the staid commercial airlines don't like the 'yuck' factor, we could hire some old Argentinian or Chilean general, experienced in these procedures (if there are any still alive and not in jail), to fly a bunch of bodies at a time and dump them all at once. But not in their preferred helicopter method. Wastes too much energy.

How about an ecologically correct balloon that would self destruct when it's a thousand Km out over the ocean? ...

Hmm...  Maybe I should open this up as a whole discussion! In the meantime, use your vote on the right side of this page.

What do YOU know about Lyme?

How do YOU want your earthly remains taken care of? VOTE, dammit!

Do you think that unmarked Halal chicken should be sold in your supermarket?